Anne Swan is a Professional Dog Trainer and national Agility Competitor and Instructor, with over 20 years experience. She began as a co-founder of Goleta Valley Dog Club in 2001, starting the dog sports club with two friends, based in Goleta, CA. Anne teaches all levels of Dog Agility and Rally Obedience classes. She created the curriculum for the Fun with Focus, Reliable Recall, and Canine Good Citizen classes taught at GVDC today.

In 2005, Anne began teaching for the Perfect Puppy Academy, a business which she now owns and where she instructs weekly dog training and puppy socialization classes. She looks forward to the enthusiasm that puppies and their owners bring to every session, helping to achieve training goals that will be utilized throughout the lifetime of the dog. Anne works with her clients to smooth the transition of adding puppies and dogs to the household, and employs gentle yet effective methods based on positive reinforcement and establishing compassionate leadership. Her mission is to help create well-behaved family members that you will look forward to spending time with.

Anne regularly attends animal behavior conferences and seminars for continuing education, in which she has the opportunity to learn from the leading trainers from around the world. In 2008 Anne earned her CPDT-KA, a professional certification showing tested knowledge in canine learning theory, dog training technique, and instruction skills.

Anne competes with her dogs in national agility competitions sponsored by organizations including the American Kennel Club and the United States Dog Agility Association. All five of Anne’s dogs have been National Finalists at the top competitions held around the US.

Anne’s Australian Cattle Dog, Kylie, is one of the most decorated dogs of her breed in the sport of Dog Agility. Kylie has won 4 National Agility Championships at premier events in California, Arizona, Florida and Nevada, has numerous Master Agility Champion titles, a Lifetime Achievement Award, and has been the #1 ranked Australian Cattle Dog in AKC agility several times. Kylie is now retired from agility, but in competition she ran with all of her heart and at top speed every time they stepped to the starting line together. Anne knows how fortunate she is to have an extra special dog like Kylie in her life as a family member and former agility teammate.

Anne’s younger Australian Cattle Dog, Maizey (Kylie’s sister), is a very accomplished agility dog as well, winning two national championship Finals and several at the Regional level as well. Maizey has earned many Master Agility Champion titles, earned trips to the AKC Agility Invitational in Florida 5 times, and was ranked as the #1 Australian Cattle Dog in AKC Agility in the US for most of her agility career. She is one of the sweetest tempered dogs that Anne has had the privilege of sharing her life with, and Maizey is a trusty coworker – often accompanying Anne to lessons with nervous or shy dog clients.

Anne’s current agility teammate is Avid, a 6-year old Border Collie. Avid comes from sheep herding genetics and has shown a lot of ability and desire to work livestock. She is also a wonderful agility partner, having recently earned her AKC Master Agility Championship title. Her favorite activity is racing down the beach at top speed, and being a nanny to the two pet rabbits.

Anne’s has competed in a variety of other sports with her dogs as well, including competitive obedience, rally obedience, and flyball. Her dogs have earned Canine Good Citizen titles, and her first Border Collie, Zip, was also a registered therapy dog.

Anne also worked for 14 years in the field of Special Education, assisting young adults with special needs to develop job skills and enter the local workforce. She trained horses for over 30 years and was a riding instructor for Hearts Therapeutic Riding Program in both Santa Barbara and Santa Ynez, as well as teaching riding lessons for Raintree Ranch.

"I’m so glad Dr. Quinn recommended you. I believe Perfect Puppy training will prove to be invaluable to us as we begin life together. You skillfully laid down a foundation of the basics while blending in many useful suggestions about lots of the smaller things. Additionally I am finding your outline to be a useful reference resource. I appreciate you expertise, kindness and talent."

"Charlie and I can't thank you enough for the class we took with Olive. The three of us have clearly benefitted from your expertise as well as your patient and caring guidance. Though we are seniors, we knew that we needed training as much as our little rescue dog did, and we hoped to find a relaxed and compassionate setting for all three of us. You came highly recommended and for good reason. You were quickly responsive to our initial inquiries, the class we chose was clearly presented on your website and lived up to its goals, and the additional "life skills" and product recommendations you suggested have been useful. In addition, we had a great time!" 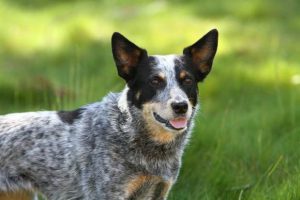 Kylie is a 13-year old Australian Cattle Dog and is one of the most decorated dogs of her breed in the sport of Agility. Kylie has won 4 National Agility Championships at premier events in California, Arizona, Florida, and Nevada. Every time they step to the line together, Kylie runs with all of her heart and tries her best for Anne. Kylie loves training and trialing in Agility and took to it very quickly as a youngster. She has been a dream partner for Anne during 10+ years together in competition: she is very smart, very fast, and not fazed at all if Anne is nervous about a run. Kylie brings confidence and joy to every course she runs, and she excels on a Jumpers course.

Anne feels fortunate to have such an enthusiastic and talented partner in Kylie. She is a nice blend of athletic and sweet and is a loving, mellow couch potato at home who loves her food and treats. Kylie’s most favorite way to celebrate victories after agility trials are with meat patties from In-N-Out Burger. Kylie never misses an opportunity to roll in the green grass, her favorite way to stretch and massage her back. Running along an open beach and swimming either in pools or through the waves make her very happy – usually accompanied with joyous barks. Kylie’s best role is as Anne’s velcro dog, always by her side. Anne knows how blessed she is to have a dog in her life who is as special as Kylie: such a talented partner but most importantly, a cherished family member.

First place in all of her classes at the 2018 AKC National Agility Championship, 12″ Preferred Division 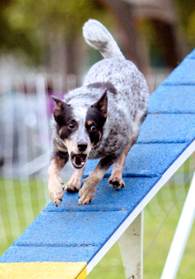 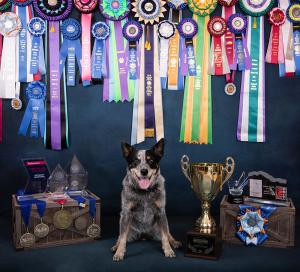 Maizey is a 10-year old Australian Cattle Dog and Kylie’s half sister. She joined the Swan family in May of 2009 and quickly made herself at home. Maizey is kind, intelligent, athletic and has a funny sense of humor. 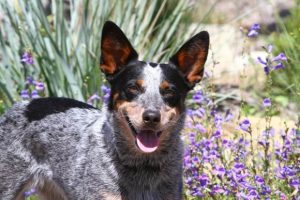 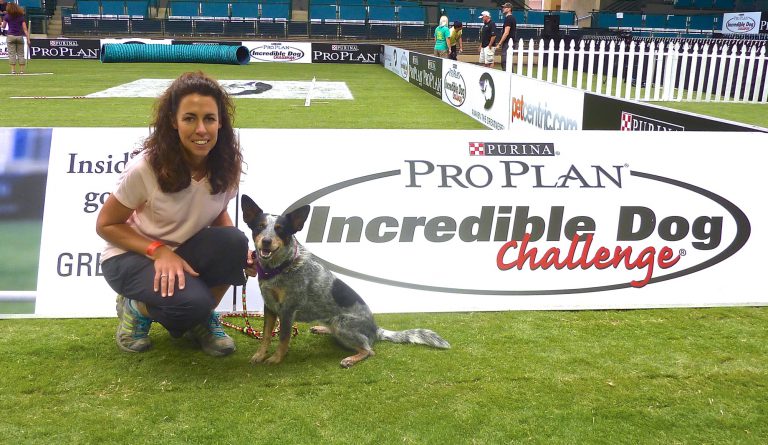 She is especially handy around the house, if she hears me drop something, Maizey will come trotting in and pick things up off the floor and hand them to me⏤she seems to really enjoy this. Maizey enjoys having her active mind put to work and has a repertoire of various tricks and skills that she will happily show off to anyone who wants to watch. She loves to carry a little towel in her mouth and bark with roo-roo-roo noises to show off for extra attention – she knows that everyone thinks it’s cute! She is an outgoing and friendly girl, and enjoys saying hi to her friends and meeting small dogs. I love spending time with Maizey, she is silly and fun and brings laughter to the household every day. Maizey’s most favorite thing to do is running up and down the beach with her sister Kylie, and they both love swimming in the waves for a tennis ball. Maizey also enjoys playing frisbee, she is fantastic at making some very tough catches.

Maizey is a very accomplished agility dog, winning the 2018 Performance Speed Jumping Finals and placing 3rd overall in the Performance Grand Prix Finals at the 2018 Cynosport Championship event in Scottsdale, AZ. In 2013, she was ranked the #1 Australian Cattle Dog in AKC Agility. She has had several career highlights to date: 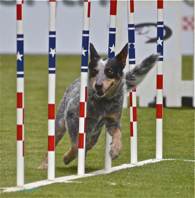 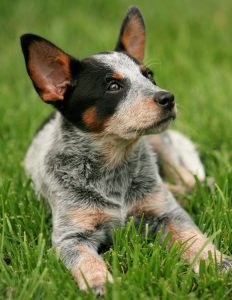 Maizey competed at the 2014 Cynosport Championship and earned medals in Team Standard and Snooker, and made the Finals in Team and Biathlon as well. In October 2011, Maizey earned her AKC MACH title, the highest title in AKC agility, and became the youngest Australian Cattle Dog in history to earn this. Maizey is my first dog with multiple MACH titles, and I am so proud of my super girl! 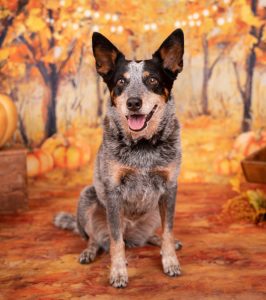 In October 2010 and 2013, Maizey competed in Agility and Rally at the Australian Cattle Dog National Specialty. At the 2010 Specialty, she earned the award for Fastest Time Overall in Jumpers with Weaves the first day, and had numerous High ACD in Class awards for Agility. Maizey won a Novice Rally class, and was part of a 4-dog team that won the Team Rally class at the Specialty.

When not doing agility, romping on the beach is her all-time favorite activity. I am looking forward to more fun with Maizey in both Agility and Rally, and am so happy to have such a fun-loving teammate. 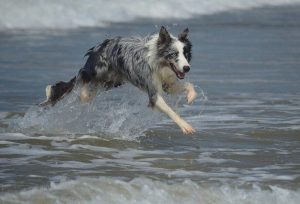 Avid is a 6-year old Border Collie and a well-loved family member and teammate. Avid is active, intelligent, playful, athletic and sweet – sometimes she is quite silly with a funny sense of humor. If not kept busy, she will find things to occupy herself – usually finding a treasure out of her toy box to play with in the yard.

Avid lives up to her name of being a fun-loving partner and is very light on her feet. She excels in the sport of agility and is keen and very responsive to cues. Avid has been training in Agility for the past 5 years, and in that time has competed at Cynosports in Scottsdale, AZ in 2018 and the AKC National Agility Championship in Tulsa, OK in 2019. Avid ran clean in all of her classes in Tulsa and earned a trip to the Finals, where she had a clean run and a top 10 finish in her first Nationals at 3 years of age. After taking a break from agility trialing for a year and a half due to the pandemic, Avid recently finished her first AKC Master Agility Champion (MACH) title in early 2022. 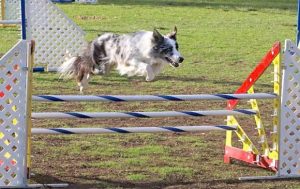 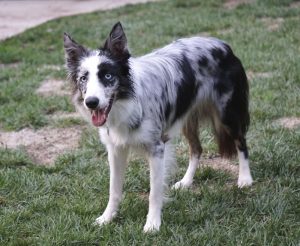 Anne and Avid also train in the sport of Canine Scentwork, and Avid is a fantastic partner even though she is relatively new to the activity. It is fascinating to watch Avid tackle a scentwork challenge using her very sensitive nose and problem solving ability, she is very intelligent and focused. In her first AKC Scentwork trial in March of 2022, Avid earned the High In Trial award for her Novice A division, she is off to a great start!

Avid is a quick learner and is always ready for a good time. She enjoys romps on the beach and swimming in the surf, playing tug, frisbee, or retrieving her ball, chasing water from the hose nozzle, and racing down the trails at the bluffs with her sister, Maizey. Avid likes to start each day with a few yodels and silly sounds which are very endearing. Avid has done several sheep herding lessons, and with some time and effort (on Anne’s part) Avid would excel in this discipline as well. For now, Avid will have to be content being the #1 supervisor of the pet rabbits at home, a duty that she takes very seriously. 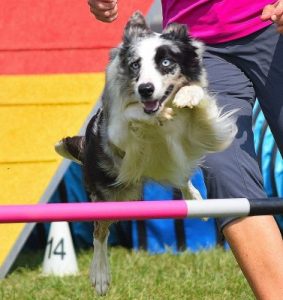 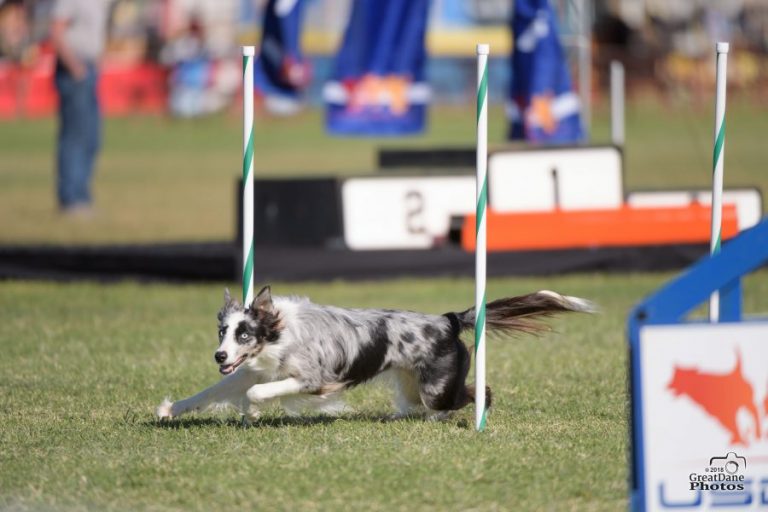